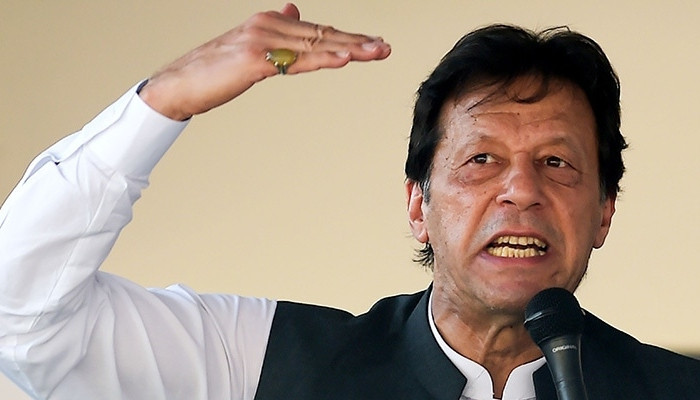 ISLAMABAD: Prime Minister Imran Khan on Wednesday took to Twitter to reiterate his support for the people of Palestine, denouncing atrocities being committed by Israel.

The death toll from the Israeli air strikes in Gaza strip has risen to 35. The tense atmosphere in Jerusalem over the past couple of days reached a crescendo on Tuesday when Israeli planes bombed Gaza following reports of rockets being fired into Israeli territory.

Israeli forces have been attacking Palestinian worshippers with stun grenades and rubber bullets over the past several days following protests against Jewish settlements in the Sheikh Jarrah area.

The massacre invite rebuke from most Muslim countries, with PM Imran Khan tweeting his support for Palestine today as well.

The prime minister tweeted an excerpt from what seems to be an old article of Noam Chomsky on the Palestine-Israel situation.

“You take my water, burn my olive trees, destroy my house, take my job, steal my land, imprison my father, kill my mother, bombard my country, starve us all, humiliate us all, but I am to blame: I shot a rocket back,” reads  the statement.

This is, by far, the heaviest exchange between Israel and Hamas since a 2014 war in Gaza, and prompted international concern that the situation could spiral out of control.

UN Middle East peace envoy Tor Wennesland tweeted: “Stop the fire immediately. We’re escalating towards a full-scale war. Leaders on all sides have to take the responsibility of de-escalation.

“The cost of war in Gaza is devastating & is being paid by ordinary people. UN is working w/ all sides to restore calm. Stop the violence now,” he wrote.

Into the early hours of Wednesday morning, Gazans reported their homes shaking and the sky lighting up with Israeli attacks, outgoing rockets and Israeli air defence missiles intercepting them.

Diplomatic sources told AFP that Egypt and Qatar, who have mediated past Israeli-Hamas conflicts, were attempting to calm tensions.