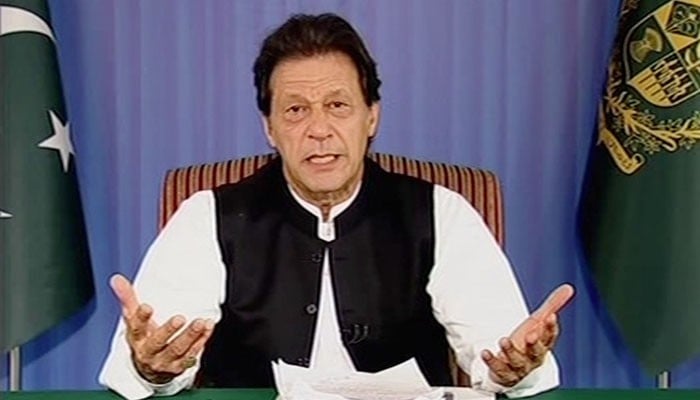 ISLAMABAD: Prime Minister Imran Khan on Monday addressed the nation today, a day after over a dozen police officers were taken hostage by the supporters of a banned outfit in Lahore, triggering clashes between police and protesters.

During his address, PM Imran Khan reminded the nation that Pakistan was built on the principles of Islam.

Earlier in the day, the Federal Minister for Information and Broadcasting Fawad Chaudhry as well as the Prime Minister’s Office had confirmed that the prime minister will address the nation today.

He said the prime minister, during his speech, will take the nation into confidence over the prevalent situation in Pakistan following countrywide protests by a banned outfit and the ensuing clashes.

Interior Minister Sheikh Rasheed, earlier on Monday, announced that 11 policemen, who were taken hostage in Lahore by the proscribed Tehreek-e-Labbaik Pakistan (TLP) have been released after negotiations carried out by the Punjab government.

In a video statement, the interior minister said the “first round of talks” concluded in a “successful manner” after which the policemen were released and the protesters had gone inside the Masjid Rehmatulil Alameen. He added that the police had also been withdrawn.

Rasheed hoped that other matters would also be sorted out in the next round, which would be held after Sehri.

The minister added that out of 192 blockades, only one was remaining and the situation was improving there as well.

“Talks have begun with the banned TLP and hopefully issues will be resolved with them,” Rasheed stated.

The four demands of the TLP included the release of their leader Saad Rivi, for TLP to be unbanned, all FIRs against their workers be dropped and a resolution be presented in the parliament to expel the French ambassador, the official added.

Yesterday, 36 policemen were injured in clashes with the rioters. Of which one is critical, Arif said.

The 16 hostages were kept in the basement of a mosque and tortured.