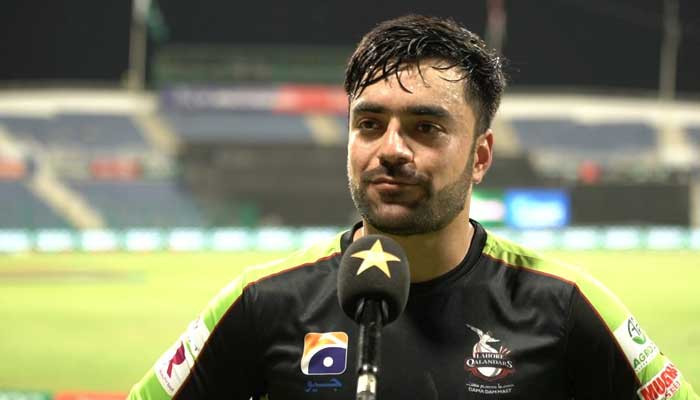 KARACHI: Lahore Qalandars’ top bowler Rashid Khan feels that his team has learnt from its past failures and it is now time for all the Qalandars to step us as one unit to perform well in the remaining matches of the tournament as well.

In a post-match statement issued to the Pakistani media, the 22-year-old bowler said that his side has got the start it wanted and everyone is contributing to the team’s cause.

“We never think about being champion, we always think about doing the right things and taking responsibility as a team. I think the more you fail, the more you learn and that’s what happened with our team as well,” he said, referring to Qalandars’ four years struggle on the points table.

“We had tough four years as a team but it’s all about learning from that, coming back strong and I think it’s time for us, you know, to step up as a team and we know how to deal [with the situation] when we are losing. The best thing now is that everyone is contributing. We have the best bowling attack, while in batting we have experience. So, it’s all about just going out there and keep showing your skills,” he said.

Rashid took 5 wickets for the Qalandars in the match against Peshawar Zalmi, conceding only 20 runs to become only the second Qalandars’ bowler to take a five-fer in a PSL match.

His performance earned him a second consecutive man of the match award and the Afghanistan spinner is happy that his performance has helped his team to get the start it needed.

Talking about the game against Peshawar Zalmi, he said that Ben Dunk and Tim David played a special knock but added that when experienced Zalmi player Shoaib Malik was on the crease, the match could have gone either way.

“We were struggling with the bat in first 10 overs and then Ben Dunk and David stayed at the crease for a while. I think it was something very special and that’s all about the team effort. Everyone contributed in that and when everyone pitches in, there’s always success,” the top spinner said.

Talking about his bowling, Rashid Khan said he was only focused on bowling at the stumps because that’s the only way to control the batsman.

“The more you bowl at the stumps, it makes a batsman think whether he should hit it or not, because if you miss the stumps, it is quite hard to get away from the batsman,” he said.