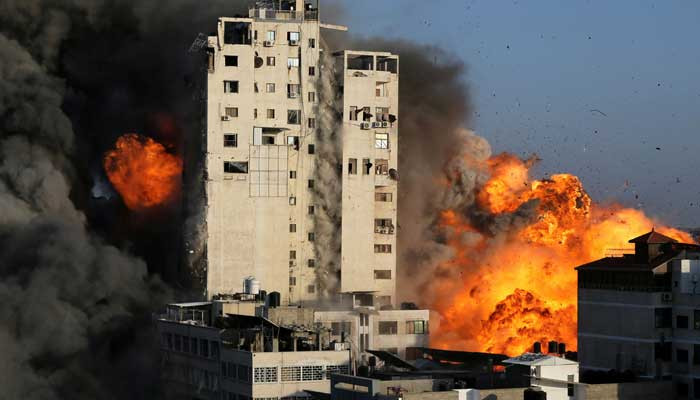 Amid an escalation of violence by Israeli forces, which has already claimed the lives of more than 100 Palestinians, reports of media offices being warned of a bombing have emerged.

According to Al Jazeera, Israel has given a “warning” that it will carry out air strikes against a building that houses the Al Jazeera offices, besides other international media channels in Gaza City.

AJ producer Lina AlSaafin tweeted about the warning, claiming that their office was given an hour and that colleagues “have already evacuated”. The time stamp on the tweet indicates it was posted at 4:13pm (Pakistan Standard Time).

Two days ago Palestinian journalist Youmna Elsayed was seen in a video posted by TRT World speaking out against Israeli aggression as buildings shook around her after being pounded several times by Israeli air strikes.

Pointing at a building in the near distance behind her, Elsayed says that Al Sharouk Tower is being targeted because it “holds most of the media offices”.

She says the only reason Israel is targeting such a tower — pausing to also name Al Jawhara Tower which also has media offices — is to “block the truth from the people of Gaza, not to bring it out to the world”.