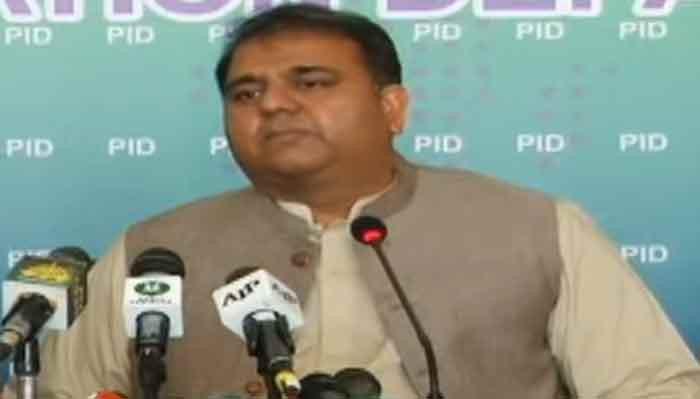 ISLAMABAD: Federal Minister for Information and Broadcasting Fawad Chaudhry on Friday defended the prime minister’s public criticism of Pakistan’s ambassadors, saying he stood with the working class and not the elite.

“I am surprised at the PML-N for criticising the prime minister’s speech to ambassadors,” said Chaudhry, sitting beside Advisor to the Prime Minister on Commerce Abdul Razzak Dawood.

“If we can’t raise our voices for overseas Pakistanis, we don’t have any right to remain in government,” he said, adding that the prime minister “stands with the working class, not the elite”.

He said if Pakistan wanted to progress as a nation, it would have to uplift the working class. The minister recalled that the prime minister had only instructed his ambassadors to take care of the needs of overseas Pakistanis.

The information minister spoke about an incident involving an overseas Pakistani woman, saying that she was being subjected to unjust treatment over the past three years.

“When she contacted an [Pakistani] embassy, she was told, ‘The police should take action against you for marrying thrice’,” said Chaudhry.

He expressed disappointment over the PML-N’s criticism, saying the party was not ready to cooperate with the government on any issue.

Chaudhry said the prime minister had, on many occasions in the past, said he was proud of Pakistan’s ambassadors. He said a few embassies had “closed their doors” on overseas Pakistani labourers, adding that action should be taken against those found guilty.

Speaking about the prime minister’s trip to Saudi Arabia, Chaudhry said it would strengthen ties between the two brotherly countries.

Speaking about the NA-249 by-poll, Chaudhry said the PML-N and other Opposition parties’ move to challenge the by-election’s verdict was welcome news.

He called on the Opposition to sit with the government on national issues and present their point of view.

“I once again urge the Opposition to demonstrate seriousness on the issue of electoral reforms,” he said.

On Wednesday, PM Khan had addressed Pakistani ambassadors stationed across the globe, days after he had called back the country’s envoy to Saudi Arabia over the alleged mistreatment of the Pakistani expat community by the latter’s staff.

“Overseas Pakistanis are precious assets of the country,” the premier had said, adding that it is unfortunate that Pakistani ambassadors do not treat them well.

“The feedback provided by Pakistani expats living in Saudi Arabia was shocking,” the premier had said. “An indifferent attitude towards the expat community is “unforgivable.” He had also read out complaints received on the Citizens Portal and slammed the “callousness” displayed by embassy workers.

“The job of embassies is to serve their citizens,” the premier had said.

Last week, PM Khan had recalled Pakistan’s Ambassador to Saudi Arabia Raja Ali Ejaz and members of the latter’s staff after reports of their alleged ‘mistreatment’ of the Pakistani expat community surfaced.

Special Assistant to PM on Overseas Pakistanis Zulfi Bukhari, making the announcement, had said the ambassador was recalled as the Pakistani community and Embassy staff had repeatedly lodged complaints against him over the past couple of months.