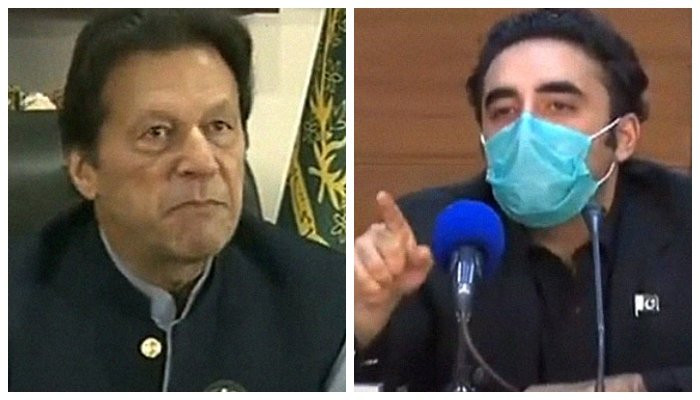 KARACHI: PPP chairperson Bilawal Bhutto-Zardari lashed out at Prime Minister Imran Khan on Monday, blaming him for the various problems of the country.

In a statement, Bilawal held the prime minister responsible for the dismal economic situation of the country, adding that “every Pakistani is paying the price of Imran Khan’s ‘Change Tsunami'”.

Speaking about PM Imran Khan’s recent trip to Saudi Arabia, Bilawal said it was unfortunate how the same prime minister, who used to talk about not obtaining loans from other countries, was carrying the “begging bowl” with him everywhere in the world.

“Mr prime minister, surely you hold vast experience in collecting donations. However, countries do not run on donations alone,” said the PPP chairperson.

Bilawal said the prime minister had borrowed money from China to return Saudi Arabia’s $3bn loan, adding that the incumbent government’s inept economic policies had made life for the common man very difficult.

“If the money we receive from loans continues to get wasted in corruption, the common man will continue to bear the burden of inflation,” he said. “Imran Khan, you should come out of your palace in Bani Gala,” added the PPP chairperson.

Bilawal said the government cannot return even the payments for the China-Pakistan Economic Corridor (CPEC) projects, adding that China was hesitant on issuing $6bn funds for the ML-1 project.

“The Chinese government’s hesitancy [in issuing the funds] are in fact an expression of their lack of confidence in the PTI government,” he said, adding that foreign investors were afraid of investing in Pakistan.

The PPP chairperson’s criticism comes after the prime minister returned from the Saudi Arabia visit aimed at strengthening ties between the two countries.

Saudi Arabia, as per Foreign Minister Shah Mahmood Qureshi, has committed to provide $500 million (Rs 75.50 billion) to Pakistan from the Saudi Development Fund for the development of infrastructure, water resources and hydropower projects in Pakistan.

Later, in a video message, Qureshi said, “The prime minister’s visit is proving highly productive and there is good news for Pakistan and the Pakistani people”.

However, he did not give details of what the good news for the people of Pakistan was.

Qureshi had mentioned earlier that Pakistan would benefit since out of 10 million workers that Saudi Arabia needed in the next 10 years, many would come from Pakistan.

“In Mohammed Bin Salman’s view, to achieve the goals set under the vision they would need massive manpower. They have estimated that they would need at least 10 million workers in the next 10 years.