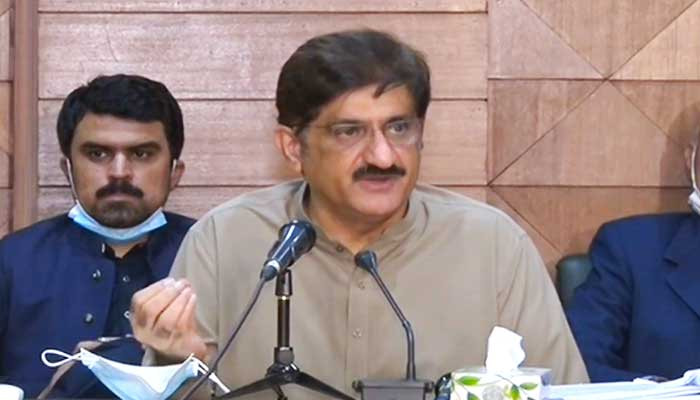 KARACHI: Sindh Chief Minister Syed Murad Ali Shah on Saturday declared an emergency in all districts of the province that lie on the coastal belt, as cyclone Tauktae gathers steam.

The chief minister was presiding over a meeting today at the CM House where he declared an emergency in all districts located along the coastal belt.

The decision was taken as a precaution so that any untoward situation can be avoided.

“A control room should be established at the chief secretary’s office to keep close coordination with all the districts, in respect of their requirements and giving them necessary instruction on behalf of the government,” he said.

During the meeting, the Director of the Pakistan Meteorological Department, Sardar Sarfraz, said there was a generic term for a non-frontal anti-clockwise rotating weather system, with surface winds ranging from 34 to 47 knots.

The PMD official briefed the chief minister that such weather systems usually caused three types of impacts, including torrential rains, thunderstorms, high intensity winds and storm surges. The main source of energy for tropical cyclones is the warm water in tropical regions, he said, adding that to initiate a tropical cyclone, the sea-surface temperature generally rose to 26 degrees.

The Sindh chief minister was told that cyclones in Pakistan and South Asia caused different kinds of disturbances. “Gusty winds and damage in detaching fruit from the tree is caused when a depression develops a pressure of 996 hPa/mb with a wind speed of 22 to 27 knots,” read the press release from the meeting.

“When deep depression with a pressure of 986-995 hPa/mb develops with a wind speed of 28 to 33 knots negligible damages are caused to houses, fruit trees, some crops and caravans. When the cyclonic storm has a pressure of 971-970 hPa/mb along with a wind speed of 34-47 knots it causes minor damages to houses and significant damage to signboards, trees and small crafts,” added the press release.

The chief minister was told that severe cyclone storms emerge when a pressure of 930 to 955 hPa/mb merges with a speed of 64-89 knots and they cause significant structural damage, causing even caravans to blow away.

Further in this category, two other subdivisions are present, namely the Extremely Severe Cyclonic Storm and the Super Cyclonic Storm which cause extensive damage to houses, power and communication lines.

Cyclones and their routes

The chief minister was told that there are two possible routes that the cyclone can travel. If the cyclone crosses Indian Gujarat, then its outer peripheral effect would be on Thatta, Badin, Mirpurkhas, Tharparkar, Umerkot and Sanghar districts.

He briefed the chief minister on the other route of the cyclone, adding that in case it crosses the north west and crosses the west of Karachi then its outer peripheral effect would be on Karachi, Hub, Lasbela, Hyderabad and Jamshoro districts.

DG PDMA Salman Shah told the meeting that the depression over the southeast Arabian Sea has intensified into a cyclonic storm, which has been dubbed as “TAUKTAE” and lay at a distance of about 1,460 km South-Southeast of Karachi.

Shah informed the meeting that the maximum sustained winds around the system centre are 90-110 km/hr gusting at 120 km/hr. The system is likely to intensify further into a Severe Cyclonic Storm (SCS) during the next 12-18 hours and move in the north-northwest direction and reach the Indian city of Gujarat by the morning of May 18.

Under the influence of this system, widespread heavy to very heavy dust/thunderstorm-rains with gusty winds of 80-100 km/hr are likely to occur in Thatta, Badin, Thar, Mirpurkhas, Umerkot and Sanghar districts from 17 May to 20 May 2021. Dust/thunderstorm-rains with few heavy falls and gusty winds of 50-70km/hr are also likely in Karachi, Hyderabad, Jamshoro, Shaheed Benzirabad, Sukkur, Larkana, Shikarpur, Jacobabad and Dadu during 18-20 May 2021.

The meeting was further informed that the sea conditions would be “rough to very rough” during this time, adding that fishermen have been advised not to venture in the sea during May 16-20.

Keeping in view the presentation given to him by the Met office and PDMA, the chief minister directed the administration in Karachi to start clearing all the choking points of nullas. He directed Commissioner Karachi Naveed Shaikh and Administrator KMC Laiq Ahmed to start removing all billboards and neo-signs.

The chief minister asked builders to take precautionary measures for the security of their under-construction buildings, directing the PDSMA to provide dewatering machines and generators to the district administration in the city and in the other districts where required.

The chief minister issued directives to fishermen, telling them not to go in the deep sea for fishing from Sunday onwards. CM Murad directed the chief secretary to set up a Control Room in his office and post a BS-19 offer as its head to receive requirements from the districts and issue necessary instructions to the administration on behalf of the government.

The Sindh chief minister directed the Minister of Local Government Nasir Shah and Minister Rehabilitation, Faraz Dero, to stay in Karachi and personally monitor the arrangements.

Who partook in the meeting?